Home » Academia » The roots of criminology; the past in the service of the future;

The roots of criminology; the past in the service of the future; 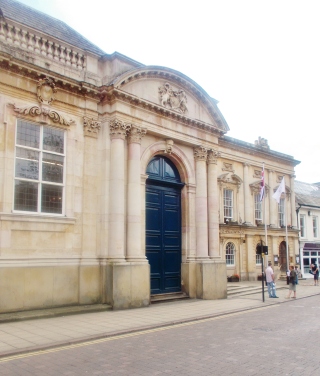 In a number of blog posts colleagues and myself (New Beginnings, Modern University or New University? Waterside: What an exciting time to be a student, Park Life, The ever rolling stream rolls on), we talked about the move to a new campus and the pedagogies it will develop for staff and students.  Despite being in one of the newest campuses in the country, we also deliver some of our course content in the Sessions House.  This is one of the oldest and most historic buildings in town.  Sometimes with students we leave the modern to take a plunge in history in a matter of hours.  Traditionally the court has been used in education primarily for mooting in the study of law or for reenactment for humanities.  On this occasion, criminology occupies the space for learning enhancement that shall go beyond these roles.

The Sessions House is the old court in the centre of Northampton, built 1676 following the great fire of Northampton in 1675.  The building was the seat of justice for the town, where the public heard unspeakable crimes from matricide to witchcraft.  Justice in the 17th century appear as a drama to be played in public, where all could hear the details of those wicked people, to be judged.  Once condemned, their execution at the gallows at the back of the court completed the spectacle of justice.  In criminology discourse, at the time this building was founded, Locke was writing about toleration and the constrains of earthy judges.  The building for the town became the embodiment of justice and the representation of fairness.  How can criminology not be part of this legacy?

There were some of the reasons why we have made this connection with the past but sometimes these connections may not be so apparent or clear.  It was in one of those sessions that I began to think of the importance of what we do.  This is not just a space; it is a connection to the past that contains part of the history of what we now recognise as criminology.  The witch trials of Northampton, among other lessons they can demonstrate, show a society suspicious of those women who are visible.  Something that four centuries after we still struggle with, if we were to observe for example the #metoo movement.  Furthermore, from the historic trials on those who murdered their partners we can now gain a new understanding, in a room full of students, instead of judges debating the merits of punishment and the boundaries of sentencing.

These are some of the reasons that will take this historic building forward and project it forward reclaiming it for what it was intended to be.  A courthouse is a place of arbitration and debate.  In the world of pedagogy knowledge is constant and ever evolving but knowing one’s roots  allows the exploration of the subject to be anchored in a way that one can identify how debates and issues evolve in the discipline.  Academic work can be solitary work, long hours of reading and assignment preparation, but it can also be demonstrative.  In this case we a group (or maybe a gang) of criminologists explore how justice and penal policy changes so sitting at the green leather seats of courtroom, whilst tapping notes on a tablet.  We are delighted to reclaim this space so that the criminologists of the future to figure out many ethical dilemmas some of whom  once may have occupied the mind of the bench and formed legal precedent.  History has a lot to teach us and we can project this into the future as new theoretical conventions are to emerge.