Time alone, socially with ourselves, can be a truly healing ordeal. When we’re alone, we tend to think. Thinking is hard work. It really takes a disciplined mind to reflect, to look at different items in life and piece them together differently than they are presented to us.…perhaps with more clarity. We may experience anxiety, left with our own thoughts in the solitude of quarantine. From whatever source or another, you may feel anxious about being alone. Develop calming practices. Curate calming activities in your life that bring you peace.

You may experience restlessness. What to do with all that time? Many of you will want to be productive. Do something you enjoy. What do you like to do with your (wrestling) hands? Hold a book? Saw wood? Bake? Knit me a scarf?!?

Whether you enjoy listening to music and talking about the memories and times music evokes, explore what you like to do. Me? I dance, read, write, binge on TV series, and digging my hands in dirt to grow stuff. I especially love propagating plants. I try any plant I can get ahold of. In my garden, I have a beautiful crawling flower I clipped in Barcelona. It spreads over soil and has bright green leaves with bright red flowers that unfold into a star at dusk. Curate creative activities in your life that bring you peace. 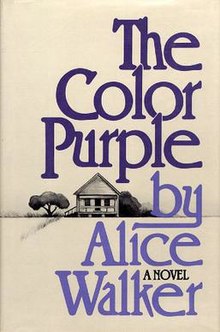 Alice walker sat and wrote The Color Purple with pen and paper. The screenwriters later came along and did the same. Each actor received their own script. On screen we watch Ms. Sofia tell Ms. Celie to “bash Mister’s head in and think about heaven later,” after confronting her for telling her step-son to beat her. Imagine how Oprah read all of THAT from just a few letters to god. On the page, Celie acknowledges her jealousy of Sofia’s power – she’s just as “poor, Black and ugly” as she. She apologizes and reconciles by helping Harpo’s next woman recognize her own power. There’s a whole storyline about this. The book more keenly develops more characters and their transformations. In our solitude, we read The Color Purple and for the first time view it in Technicolor.

In the book, of course, we neither see the bruises and blood nor hear the screams the children must have hears when Mister beats Celie senselessly throughout their marriage. We read how Celie gained the courage to leave this batterer. Oh, and the grandest surprise is that Shug reveals to Celie that God ain’t a man, and he ain’t white, neither. If God were a white man, neither could believe in him, according to the book. Both their redemptions came from there, not as the film shows. In the film, Shug is a floozy who redeems herself by becoming ‘respectable’.  The film doesn’t question the heteropatriarchal god, a central narrative in the book.

The book is really queer. Harpo loves to cook, clean and take care of kids while his woman works. Harpo resolves his Oedipal dilemma by accepting that he’s not a patriarch like his father. The film depicts his struggle but not this resolution. In the book, there’s an entire sub-narrative about how Celie’s kids in Africa – raised by her sister Nettie – reject the traditional gender roles. This is only hinted at in the film.

Of course, Celie’s a lesbian, Shug’s bisexual and Mister is cool with their love triangle. In the book, Mister’s redemption is there, literally becoming just a tiny bit more feminist, though still not nearly as the flashy boxer Shug later marries. Another big twist is that in the book is that Shug and her husband split amicably; he moves south of the border with Harpo’s woman, Mary Agnes, to run their very own marijuana plantation.

Celie encouraged Mary Agnes to stop people from calling her Squeak, a sub-narrative that only is hinted at in the film’s iconic Thanksgiving scene, aka Celie’s uprising. I love Celie’s nasty retort to Mister’s sinister dad in this scene: “Seem like if he hadn’t been your boy, he might a made somebody a halfway decent man.”  Shug helps Mary Agnes have her own singing career, as implied in the Thanksgiving scene when she says she’s leaving with Celie and Shug Avery. In a deep hearty laugh that breaks the dramatic tension, Sofia declares: “Oh, Sofia(‘s) home.” 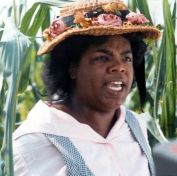 Self-love and women supporting women are huge themes that can’t be captured in a movie, it needs a whole mini-series to watch at home.  Serendipitously, at the end of the scene when their boarding the car, Celie’s hex on Mister is almost taken directly from the pages. “Until you do right by me, ev’ry thing you even think about gonna fail!”

Finally, in the book, Celie and Mister eventually become friends. Come back with her long-lost kids and the dear sister Nettie he’d banished and “whoop his ass.” I love, love, love the film, but all of this was erased from book to script. I discovered all of this in my solitude.

The Color Purple was originally written as Celie’s prayers, the way she escaped the hell of her existence. In the book, she found this through love. On the paper, we can see that she stops writing to “God” and instead addresses the letters to her sister Nettie, the one who taught her to read (in both versions).  The pages, not the movie, clearly reveal this spiritual transformation. Celie continues to write to Nettie, not knowing anything of her fate, only having found the old letters Mister had stashed away for years. Their love was so strong that in her solitude, writing the letters brought her peace. Curate writing activities that bring you peace.

Do you keep a journal, dabble in poetry, admire the prose in your head? Set aside time as a family for writing and reading. Experience solitude together. Share your work. Curate activities that bring you peace. Use this quarantine to strengthen your capacity to love.