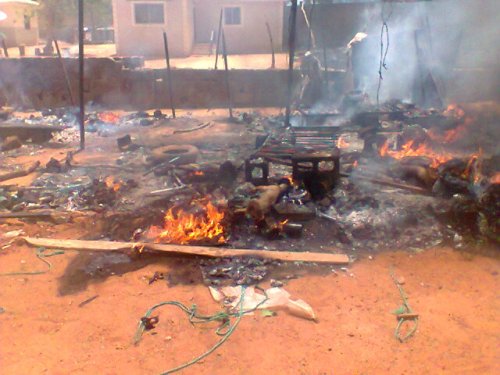 Sallek is a graduate from the MSc Criminology. He is currently undertaking doctoral studies at Stellenbosch University, South Africa.

Having spent the early years of my life in Nigeria, one of the first culture shock I experienced in the UK was seeing that its regular police do not wield arms. Unsurprising, in my lecture on the nature and causes of war in Africa, a young British student studying in Stellenbosch University also shared a similar but reverse sentiment – the South African police and private security forces wield arms openly. To her, this was troubling, but, even more distressing is the everyday use of most African militaries in society for internal security enforcement duties. This is either in direct conflict to the conventional understanding on the institutions involved in the criminal justice system, or African States have developed a unique and unconventional system. Thus, this raises a lot of questions needing answers and this entry is an attempt to stimulate further, thoughts and debate on this issue.

Conventionally, two spheres make up state security, the internal sphere of policing and law enforcement and the external sphere of defence and war-fighting. However, since the end of the Cold War, distinguishing between the two has become particularly difficult because of the internal involvement of the military in society. Several explanations explain why the military has become an active player in the internal sphere doing security enforcement duties in support of the police or as an independent player. Key among this is the general weakness and lack of legitimacy of the police, thus, the use of the military which has the capacity to suppress violence and ‘insurgence.’ Also, a lack of public trust, confidence, and legitimacy of the government is another key reason States resort to authoritarian practices, particularly using the military to clamp down civil society. The recent protests in Togo which turned ‘bloody’ following violent State repression presents a case in point. The recent carnage in Plateau State, Nigeria where herdsmen of similar ethnic origin as the President ‘allegedly’ killed over fifty civilians in cold blood also presents another instance. The President neither condemned the attacks nor declared a national mourning despite public outcry over the complicity of the military in the massacre.

Certainly, using the military for internal security enforcement otherwise known as military aid to civil authority in society comes with attendant challenges. One reason for this is the discrepancy of this role with its training particularly because military training and indoctrination focuses extensively on lethality and the application of force. This often results to several incidences of human rights abuses, the restriction of civil liberty and in extreme cases, summary extrajudicial killings. This situation worsens in societies affected by sectarian violence where the military assumes the leading role of law enforcement to force the return to peace as is the case in Plateau State, Nigeria. The problem with this is, in many of these States, the criminal justice system is also weak and thereby unable to guarantee judicial remedy to victims of State repression.

Consequently, citizens faced by the security dilemma of State repression and violence from armed groups may be compelled to join or seek protection from opposition groups thereby creating further security quandary. In turn, this affects the interaction of the citizenry with the military thereby straining civil-military relations in the State with the end result been the spinning of violence cycle. It also places huge economic burden with lasting impact on State resources, individuals, and corporate bodies and where the military is predatory, insecurity could worsen. The sectarian violence in Plateau State and the Niger Delta region in Nigeria where such military heavy-handedness remains the source of (in)security shows the weakness of this approach, and unless reconsidered, peace could remain elusive. Thus, now more than ever, this ambiguous (dis)order requires reconsideration for a civil approach to security in Africa.