What Price Peace? The Belfast Agreement 20 years on 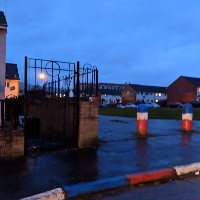 Image from January 2019: red white and blue curb stones demark this as a loyalist area in Belfast

Dr Helen Poole is Deputy Dean in the Faculty of Health and Society and Lead for University of Northampton’s Research Centre for the Reduction of Gun Crime, Trafficking and Terrorism

I recently had the privilege to join a Law Masters field trip to Northern Ireland. I had few pre-conceptions when I left, but I had come to understand the 1998 Belfast Agreement, often deemed to be under threat from BREXIT arrangements, was tenuous at best, regardless of the any deal or no deal situation with Europe. Indeed, our trip to Derry had to be cancelled due to a car bomb explosion a few days before, reported in some press to be motivated by BREXIT, but more likely designed to mark 100 years since the start of the Irish War of Independence.

What became clear after long discussions with representatives from the Police Service of Northern Ireland (PSNI), an ex-political prisoner, and a member of the suspended Legislative Assembly at Stormont, is that Northern Ireland has been far from peaceful in the last 20 years, but the nature of the threat has changed. Furthermore, the risks of returning to the days of political conflict are dependent not only on whatever BREXIT brings, but also on the fact that there has been no effective Assembly in Northern Ireland for over 2 years, increasing the chances of a return to direct rule from Westminster. Furthermore, the complexity of the situation is considerable, with multiple groups active within discreet areas of Belfast and elsewhere in Northern Ireland.

There is much being discussed at the moment regarding the crime-terror nexus, the idea that criminals and terrorists cooperate, co-exist or perhaps adopt one another’s tactics in order to further their respective causes: financial gain and ideology respectively. However, it is perhaps more accurate to say that terrorists in Northern Ireland moved from organised criminal activity to support their ideological plight, a sort of necessary evil, to becoming predominately organised criminals using ideology to legitimise their activities, which include drug dealing, prostitution, money laundering, extortion, and the trafficking of fuel, tobacco, alcohol, drugs, people and firearms.

This loose alignment of organised criminals to distinct groups who were active in the conflict provides them with a legitimacy in communities, which enables them to continue with their activities largely unchallenged. Coupled with this, years of distrust of the Royal Ulster Constabulary, now replaced with the PSNI, means that those masquerading as para-militaries, are often the communities first port of call when they are experiencing difficulties. These groups provide not only protection through a form of policing largely comprised of violence and intimidation, but also act as a pseudo-Citizen’s Advice Bureau, coaching individuals on maximising their benefit awards for example. It is well-known that these groups exert their own form of justice, such as pre-arranged shootings, which has led the Government to release a media campaign in an attempt to tackle this. We have thus reached a situation where organised criminal groups are running some communities by a form of consent as a result of a perceived lack of any other legitimate authority to represent them.

Are we facing an ‘arms race’ on the streets of the UK?

Dr Helen Poole is Deputy Dean in the Faculty of Health and Society and Lead for University of Northampton’s Research Centre for the Reduction of Gun Crime, Trafficking and Terrorism

As the Government’s Violent Crimes Bill passes through its second hearing, the emphasis is clearly on controlling corrosive substances and knives. This is entirely appropriate since the vast majority of armed crime resulting in death or injury in the UK currently involves one or the other. Other than proposing tighter controls on 0.5 calibre rifles and bump-stock devices, the Bill is virtually silent on firearms, although it is surprising that either of these devices are not more tightly regulated already.

However, what is of greater concern is that the UK and other EU jurisdictions are not taking stronger heed of the findings of the EU funded Project SAFTE, published by the Flemish Peace Institute in April 2018. SAFTE alludes to what it calls an ‘arms race’ based on the fact that there are more weapons entering the illicit market than are being seized. Thus, according to basic economic principles of supply and demand, firearms, and particularly military grade firearms, will become cheaper on the illicit market. Furthermore, as organised crime groups and gangs weaponise, there will be a greater need for their foes to be equally equipped.

The question of where these firearms and small arms and light weapons emanate from is key to understanding the potential problem this poses on the streets of the UK. The vast majority of firearms are produced legally, by states such as the UK and USA. However, the reason that there are so many illicit weapons in circulation, is that these firearms are often diverted into illicit hands, either through corruption or criminal activity. This diversion into what is commonly referred to as the ‘grey market’, contributes to more than 200,000 global firearms deaths every year, excluding conflict zones.

The firearms black-market, whereby weapons and ammunition are produced illegally, is of relative insignificance in the overall global picture of firearms related harm. Therefore, tackling the diversion of firearms from lawful production is more likely to have a positive impact on firearms related harm, and also combat the emerging arms race identified through Project SAFTE. Considering the scale of the grey market problem, it would appear that this is where resources should be directed if states and international organisations are serious about reducing the harm caused to societies by firearms. Indeed, the United Nations regard firearms as one of the obstacles to obtaining Sustainable Development Goal 16 on Peace Justice and Strong Institutions, particularly 16.4 which aims to ‘significantly reduce illicit financial and arms flows, strengthen the recovery and return of stolen assets and combat all forms of organized crime’ by 2030.

The international arms trade and its subsequent implications for state sponsored and criminal diversion it clearly a politically sensitive topic. However, it is at the core of addressing the tens of thousands of lives that are lost to firearms annually.