July 13, 2018 12:53 / 2 Comments on Thoughts from the British Society of Criminology Conference at Birmingham City University 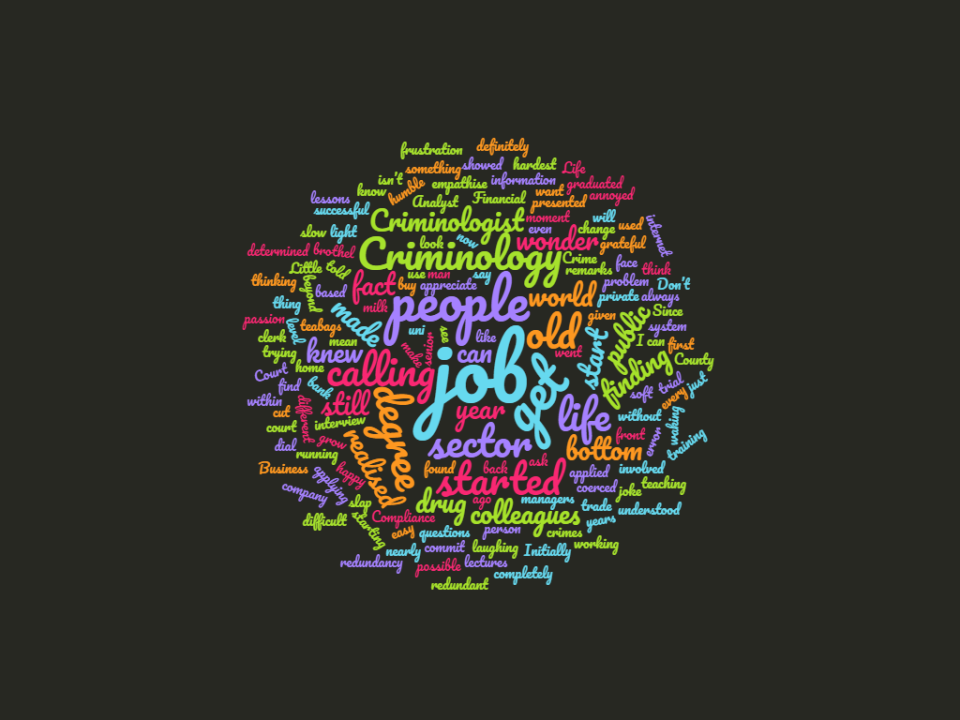 I attended the BSC conference last week, presenting a paper from my PhD research, doing the usual rounds of seeing familiar faces, meeting some new faces and hoping nobody uttered the words ‘well its more of an observation than a question’. There was one session which particularly inspired me and so is the focus of this blog. The key theme was that as criminologists and educators, we need to review the quality of methods of teaching to keep students engaged, but crucially, not to lose sight of the importance of the content. We must continue to introduce students to more challenging ideas and shift their thinking from accepted wisdom of how to ‘do justice’ and ‘why people commit crime’.

The session attended was on ‘Public Criminology’, which included papers on the experiences of LGBTQ communities in Turkey, with regards to police response to victimisation, another on the use of social media and other forms of broadcast used by academics on criminology programmes, the impact of the 2011 riots on social capital in the UK and the need to re-introduce political issues in teaching criminology. As with many sessions at large conferences, you never quite know what will emerge from the range of papers, and you hope there are some common themes for the panel and delegate to engage with in discussions. This certainly happened here, in what seems to be a diverse range of topics, we generated interesting discussions about how we understand crime and justice, how the public understand this, what responsibilities we have in teaching the next generation and how important it is to retain our critical focus. The paper that really resonated with me was delivered by Marc Jacobs from the University of Portsmouth on ‘The Myopia of Public Criminology and the need for a (re) Politicised Criminology Education’.  Marc was an engaging speaker and made a clear point about the need to continue our focus on the work of activist criminologists, who emerged during the 1970s, asking important questions about class, race and gender issues. He cited scholars such as Jock Young, Stuart Hall, Frances Heidensohn as pioneers in shining a light on the need to understand crime and justice from these diverse perspectives.

This is certainly what I remember from studying criminology as a post-graduate, and they have informed my teaching, especially criminological theories – I have always had a closer personal affinity with sociological perspectives, compared to biological and psychological explanations of crime. It also reminded me of a running theme of complaint from some students – political issues are not as interesting as say, examining the motivations of serial killers, neither are those lectures which link class, race and gender to crime, and which highlight how discrimination in society is reflected in who commits crime, why they do it, and why we respond the way we do. There is no doubt presenting students with the broader social, political and cultural contexts means they need to see the problem of crime as a reflection of these contexts, that is does not happen as a rare event which we can always predict and solve. It happens every day, is not always reported, let alone detected and solved, meaning that many people can experience crime, but may not experience justice.

As tempting as it might be to focus teaching and engage students through examining the motivation for serious crimes to reinforce students’ expectations of criminology being about offender profiling and CSI techniques which solve cases and allow us all to sleep safely, I’m afraid this means neglecting something which will affect their lives when they do look up from the fascinating case files. I am not advocating the exclusion of any knowledge, far from it, but we need to ensure that we continue to inform students about the foundations of our discipline, and that it is the every day events and the lack of access to justice which they also need to know about. They reflect the broader inequalities which feed into the incidences of crime, the discriminatory policies and practice in the CJS, and the acceptance of this by the public. Rawls (1971) presented justice as a ‘stabilising force’, a premise picked up by New Labour in their active citizenship and neighbourhood renewal agenda. There was an attempt to shift justice away from punitive and retributive responses, to make use of approaches which were more effective, more humane and less discriminatory. The probation services and courts were an important focus, using restorative and problem-solving approaches to genuinely implement Tony Blair’s manifesto promise to be tough on the causes of crime. However, he also continued the rhetoric of being tough on crime, and so there was sense of using community sentencing and community justice in a tokenistic way, and not tackling the broader inequalities and problems sufficiently to allow the CJS to have a more transformative and socially meaningful effect on crime (Donoghue, 2014; Ward, 2014). Since then, the punitive responses to crime have returned, accepted by the public, press and politicians, as anything else is simply too difficult a problem to solve, and requires meaningful and sustained investment. This has been a feature of community justice, half hearted attempts to innovate and adopt different approaches, all too easily overtaken by the need for a day in court and a custodial sentence. It shows what happens when the public accept this as justice and the function of the CJS, even though they are not effective, put the public at risk, and mean entrenched biases continue to occur.

This all emphasises the need to remember the foundations of our discipline as a critical examination of criminal justice and of society. In my own department, we have the debates about where we place theory as part of these foundations. These discussions occur in the context of how to engage students and maintain our focus on this, and it remains an important part of higher education to review practice, content and adapt to broader changes. Moving to a new campus means we have to re-think these issues in the context of the delivery of teaching, and I am all for innovations in teaching to engage students, making use of new technologies, but I firmly believe we need to retain our focus on the content which will challenge students. This is the point of higher education, to advance knowledge, to raise students’ expectations of their own potential and ask them to rethink what they know. The focus on ‘public criminology’ has justified using different forms of broadcast, from TV, tabloid press and social networking to disseminate knowledge and, hopefully, better inform the public, as a counter measure to biased reporting.  I don’t think it is desirable to TV producers to replace ‘I am a Killer’ on the Crime and Investigation network with ‘Adventures of a Problem-Solving Court’ or ‘Restorative Justice: The Facts’. Writing for the tabloid press seems to me an act of futility, as they have editorial control, they can easily misrepresent findings, and are not really interested in anything which shifts the notion of justice as needing to have a deterrent effect and to be a retributive act. Perhaps social networking can overcome this bias, but in an age of claims of fake news and echo chambers, this surely also has a limited affect. So, our focus must remain on our students, to those who will work within the CJS, social policy departments as practitioners, researchers and future academics. They need to continue to raise the debates about crime and justice which affect the marginalised, which highlight prejudice, discrimination and which ensure we continue to ask questions about these thorny, difficult and controversial issues. That, I think, is the responsibility we need to grasp, and it should form a core function of learning about criminology and criminal justice at University.

The criminology of real life

Ever since I joined academia as a criminology lecturer, I found the question asked “what do you do” to be one that is followed by further questions.  The role or rather title of a criminologist is one that is always met with great curiosity.  Being a lecturer is a general title that most people understand as a person who does lectures, seminars, tutorials and workshops, something akin to a teacher.  But what does a criminology lecturer do?  Talks about crime presumably…but do they understand criminals? And more to the point, how do they understand them?

The supposed reading of the criminal mind is something that connects with the collective zeitgeist of our time.  Some of our colleagues have called this the CSI factor or phenomenon.  A media portrayal of criminal investigation into violent crime, usually murder, that seems to follow the old whodunit recipe sprinkled with some forensic science with some “pop” psychology on the side.  The popularity of this phenomenon is well recorded and can easily be demonstrated by the numerous programmes which seemingly proliferate.  I believe that there are even television channels now devoted completely to crime programmes.  Here, it would be good to point out that it is slightly hypocritical to criticise crime related problems when some of us, on occasion, enjoy a good crime dramatisation on paper or in the movies.

Therefore I understand the wider interest and to some degree I expect that in a society dominated with mass and social media, people will try to relate fiction with academic expertise.  In fact, in some cases I find it quite interesting as a contemporary tool of social conversation.  You can have for example, hours of discussion about profiling, killers and other crimes with inquisitive taxi-drivers, border-control officers, hotel managers etc.  They ask profession, you respond “criminologist” and you can end up having a long involving conversation about a programme you may have never seen.

There is however, quite possibly a personal limitation, a point where I draw the line.  This is primarily when I get asked about particular people or current live crime cases.  In the first year I talk to our students about the Soham murders.  A case that happened close to 15 years ago now.  What I have not told the students before, is the reason I talk about the case.

Fifteen years ago I was returning from holiday and I took a taxi home.  The taxi driver, once he heard I was a criminology lecturer, asked me about the case.  I remember this conversation as the academic and the everyday collided.  He could not understand why I could not read the criminal intentions of the “monsters” who did what they did.  To him, it was so clear and straightforward and therefore my inability to give him straight answers was frustrating.  I thought about it since and of course other situations in similar criminal cases that I have been asked about.  Why do people want complete and direct answers to the most complex of human behaviours?

One of the reasons that there is a public expectation to be able to talk about individual cases rests on the same factor that makes crime popular; its media portrayal.  The way we collectively respond to real crime cases reflects a popularised dramatisation.  So, this is not just a clash between academic and lay, but reality and fiction.